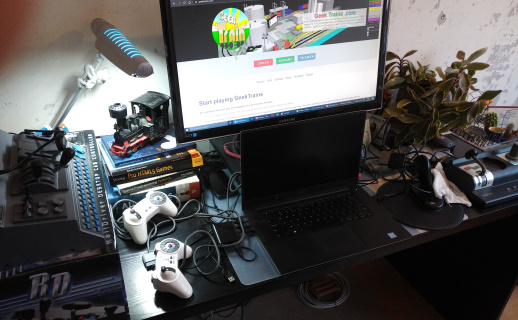 You are reading GeekTrains.com developer's technical documentation, written by Quintus Hegie for computer geeks and train enthousiasts. With this documentation you'll be able to develop new levels and create new game objects (locomotives and/or wagons).

Please note: The game specific soure code is protected with legal copyright! You may not use this code to create your own train or similar game, but you can use some components and logic for any other type of game. The code may be changed at any time without any notification, rendering any custom additions maybe no longer compatible with the latest version.

In comparison with regular train simulator games with large worlds that are partly visible, my game is about model trains where the whole play world fits into a single room so to say. The player thus generally has a good camera view over the whole level (room). Therefore most meshes are visible and need to be rendered most of the time. This creates a challenge for keeping a constant and high framerate, because only a little fraction of the meshes will be out of view most of the time. That is why I use some specific scene optimization techniques for this train game.

To main save on memory use (for low end devices) and network bandwidth (slow connections) and server traffic (costs), the textures used in the game come in several qualities. We set the quality mainly by choosing the resolution or pixel dimensions (width and height) of the texture. Depending on the type of texture contents, we choose for a JPEG (photo/realistic) or PNG (drawing/cartoonistic) compression technique and file format. The GPU generaly won't care which format we use, and often has enough RAM, but if the player has a low end device with no GPU then we want to reduce the load on CPU and normal memory.

A level mainly consists of a terrain or playing ground, that is visible in full or in large part. Next in line of frequently visible meshes are the train tracks. The train tracks may be observed from very close by (when camera is set to train drivers view mode) as well as from a large distance (when camera is set to level map view). A technique to speed up rendering when using various distances to view the same mesh is to apply Level of Detail (LOD).

Layer masks limit the rendering of GameStateObject.models for certain BABYLON.Cameras only. The main practical of the layerMask feature is for local multiplayer support (split screen co-operative/counter-operative mode).

The decoding table for layerMasks is as follows:

Screen splits are always in order from top-left to bottom-right.

The game consists of many different game object types, which each have their own unique capabilities. To keep the game logic as simple as possible, I chose to use a config or settings file to set up a specific game object type.

This config file contains the properties to set for the different game objects. This way it would be easier for me to tweak the game settings in order to get the best gaming experience. The specific game object's type config will be loaded in the GameObject definition from the settings.js file.

A game object (GameStateObject in code) represents an object that is of interest of the game play.

A locomotive is equiped with a motorblock and is controllable by a player.

A wagon is not motorized and needs to be pushed/pulled by a locomotive.

A train is a logical unit that consists of one or more vehicles (array). Because this is a train game, the vehicles in a train are typically rail vehicle game objects like wagons and locomotives. A train has at most 1 master, that is the unit that controls or moves the train (often the 1st locomotive).

A train vehicle sequence imposes a new (additional) constraint on its vehicles. Where a wagon and/or locomotive is already rail track bound by its wheels, a train also is bound to the condition that the vehicles are attached to each other. The separate vehicles together form a whole 1 train.

The constraint added is that the distance between each coupling is limited by a min and max hook 'rope'. This is of course a simplification of the physical constraint for real world model trains (as hooks aren't ropes but rigid bodies), but it gives enough effect of a train composition because the vehicles are bound to the rail track anyway. As rail tracks won't make sudden abrupt 90-degree angles, but only slow smooth curves, the 'rope' constraint will give nice enough visual impression of inter-wagon connection.

A Way Point System is composed of a set of waypoints (array of coordinates).

The waypoints (coordinates) can be expressed in 2 ways:

In its simplest form, the TrainLineSystem is a collection of paths (or ways) connected at nodes.

Each segment within the TrainLineSystem is called a TrainLine. The segment actually contains the 3D track mesh.

The segments are connected to each other via points (railroad switches / turnouts) or connectors.

Railroad track is laid very similar to the construction of a toy model railroad layout: consecutively by connected each train piece to the next. Railroad track is then laid using track piece chains. The order of the track laying must respect the natural driving direction.

The following track pieces are available:

A starting track (for example a buffer stop) can be given a starting position and rotation. Any next connected track will be layed in the specified direction.

The slope parameter is expressed as a fraction. So when slope = 0.01 then the slope is 1 centimeter rise per 100 centimenter flat distance. Regardless of the slope the length is always measured in flat distance (does not take into account the equal or longer length of the slope distance). This makes connecting track pieces with slopes more easily in a 3D-world, as the distance is always measured on the 2D-surface plane.

Turnouts are logical units and don't have a track size (length) themselves, so you must connect straight or curved tracks yourself. All turnouts must have an unique id each so the track layer knows which tracks to connect where to it in what direction. Based on the entry and exit-points, tracks are connected to the turnouts. For example, the leftturnout has connecting points start, left and straight.

Trigger magnets are logical units and don't have a track size (length) themselves. You cannot start or end track with a triggermagnet; it must be placed within a track segment. If a group is specified, the triggermagnet will trigger any logic tied to that group. For example, you can open or close a bridge, a gated level crossing, change a signal, etc.

The joints can be restricted so that movement or rotation is limited to a certain distance or angle for example by setting the min and max properties.

In the game, places and areas of interest and interaction are marked by the logical Place and Zone GameObjects. Both a Place and a Zone have a position and a rotation, but only a Zone has a scaling attribute.

The usage of places and areas enables interaction in the level for moveable GameObjects. For example for a Vehicle (including locomotives, wagons and figures), but also for Item (such as goods). Both a Place and a Zone trigger an action on moveable GameObjects entering and/or leaving the marked location or area.

A difference between a Place and a Zone is that an occupant bounding box need not fit in a Place, but must fit as a whole in a Zone.

A Place has no shape because it only marks a location. The rotation may indicate at which direction the occupant must occupy the place.

We defined a special set of Places that mark some standard location automatically. The special Place.type options are:

A Zone has either a box or sphere shape to describe the size of the area. The shape also determines the colission detection to use for GameObject models entering and exiting the area.

The default size of the Zone is Babylon.Vector3.One().

Use the GameObject parenting system to attach a Zone to a (often static) GameObject such as a Structure.

We defined a special set of Zones that accomplish some standard task automatically. These types of Zones also show visible markers, so their presense and usage is more clear to the Player. The special Zones are:

Players get to play Levels.

If you want to add a new Level to the list of playable levels, you will need to prepare a Level Setup Javascript file. This Level Setup file is loaded by the Level GameStateObject, when the Player chooses a Level.

The Level Setup file contains instructions for the Level-constructor about things like:

Design fun and challenging Levels can be an art in itself. Though these are the steps you need to take in general to design a Level Setup file:

The code will scale all level scenery down such that the track becomes G-scale gauge again. So when placing scenery in a larger-than-G-scale-gauge Level, make sure you adjust the scaling-property of the GameStateObject to match the relative adjustment factor between your desired scale and the G-scale (e.g. 2 for converting 3½ to 1¾).

You can design your railroad track layout using 3rd party tools from vendors like:

Using some simple logic, the designed track plan can be converted to the GeekTrains system. E.g. by approximating the length of straight track parts and the radius of curved track parts.

First set the general properties of the level:

Second, construct the empty world (that will later contain the model train tracks). It can have the following optional properties: (When you omit some properties, they will fall back to a default setting.)

The background to use (rendered behind the skybox, if a skybox is present).

To enable a fog effect.

The surface plane (prevents objects from falling into an infinite abyss).

Fourth, add all other objects to complete the scene:

Finally, decide upon 1 and up to 5 mission objectives in order to complete the level. The objectives are stored as an Array, where each Item represents an Objective.

The Level is over when all objectives have been met, a critical objective has been failed, or when another non-objective event occurs like running out of health, fuel or money.

We have support for specific train-simulator hardware game peripherals.

The specific train-simulator hardware must support HID by default (e.g. through its driver software). Best option not to have the hardware report itself as a Mouse or Keyboard (because these input methods are locked in browser).

Some hardware game peripherals can be used without software installation, using a hardware USB-adapter plug (e.g. PSX2USB), such as classic PlayStation/Nintendo/DreamCast Densha de Go! controllers from Taito. These peripherals will be treated (and read out) like a regular GamePad controller.

I can recommend the following literature for developers: